Welcome to the health configuration reference.

This guide contains information about editing health configuration files to tweak existing alarms or create new health entities that are customized to the needs of your infrastructure.

To learn the basics of locating and editing health configuration files, see the health quickstart.

What’s in this reference guide¶

The following reference contains information about the syntax and options of health entities, which Netdata attaches to charts in order to trigger alarms.

Entities are written into .conf files, inside of the health.d/ directory, using YAML formatting.

There are two entity types: alarms and templates. They have the same format and feature set—the only difference is their label.

Alarms are attached to specific charts and use the alarm label.

Templates define rules that apply to all charts of a specific context, and use the template label. Templates help you apply one entity to all disks, all network interfaces, all MySQL databases, and so on.

Alarms have higher precedence and will override templates. If an alarm and template entity have the same name and attach to the same chart, Netdata will use the alarm.

Netdata parses the following lines. Beneath the table is an in-depth explanation of each line’s purpose and syntax.

The alarm or template line must be the first line of any entity.

This line starts an alarm or template based on the entity type you’re interested in creating.

NAME can be anything, with . (period) and _ (underscore) as the only allowed symbols.

This line defines the chart this alarm should attach to.

The value CHART should be the unique ID or name of the chart you’re interested in, as shown on the dashboard. In the image below, the unique ID is system.cpu.

The value CONTEXT should be the context you want this template to attach to.

Need to find the context? Hover over the date on any given chart and look at the tooltip. In the image below, which shows a disk I/O chart, the tooltip reads: proc:/proc/diskstats, disk.io. 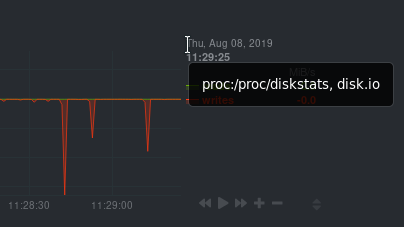 You’re interested in what comes after the comma: disk.io. That’s the name of the chart’s context.

If you create a template using the disk.io context, it will apply an alarm to every disk available on your system.

The alarm or template will be used only if the operating system of the host matches this list specified in os. The value is a space-separated list.

The following example enables the entity on Linux, FreeBSD, and MacOS, but no other operating systems.

The alarm or template will be used only if the hostname of the host matches this space-separated list.

The families line, used only alongside templates, filters which families within the context this alarm should apply to. The value is a space-separated list.

For example, you can create a template on the disk.io context, but filter it to only the sda and sdb families:

This line makes a database lookup to find a value. This result of this lookup is available as $this.

Everything is the same with badges. In short:

The result of the lookup will be available as $this and $NAME in expressions. The timestamps of the timeframe evaluated by the database lookup is available as variables $after and $before (both are unix timestamps).

A calc is designed to apply some calculation to the values or variables available to the entity. The result of the calculation will be made available at the $this variable, overwriting the value from your lookup, to use in warning and critical expressions.

When paired with lookup, calc will perform the calculation just after lookup has retreived a value from Netdata’s database.

You can use calc without lookup if you are using other available variables.

The calc line uses expressions for its syntax.

Sets the update frequency of this alarm. This is the same to the every DURATION given in the lookup lines.

Set the green and red thresholds of a chart. Both are available as $green and $red in expressions. If multiple alarms define different thresholds, the ones defined by the first alarm will be used. These will eventually visualized on the dashboard, so only one set of them is allowed. If you need multiple sets of them in different alarms, use absolute numbers instead of $red and $green.

Define the expression that triggers either a warning or critical alarm. These are optional, and should evaluate to either true or false (or zero/non-zero).

This will be the first parameter of the script to be executed when the alarm switches status. Its meaning is left up to the exec script.

The default exec script, alarm-notify.sh, uses this field as a space separated list of roles, which are then consulted to find the exact recipients per notification method.

The script that will be executed when the alarm changes status.

The default SCRIPT is Netdata’s alarm-notify.sh, which supports all the notifications methods Netdata supports, including custom hooks.

This is used to provide optional hysteresis settings for the notifications, to defend against notification floods. These settings do not affect the actual alarm - only the time the exec script is executed.

Defines the interval between repeating notifications for the alarms in CRITICAL or WARNING mode. This will override the default interval settings inherited from health settings in netdata.conf. The default settings for repeating notifications are default repeat warning = DURATION and default repeat critical = DURATION which can be found in health stock configuration, when one of these interval is bigger than 0, Netdata will activate the repeat notification for CRITICAL, CLEAR and WARNING messages.

The only possible value for the option line is

For some alarms we need compare two time-frames, to detect anomalies. For example, health.d/httpcheck.conf has an alarm template called web_service_slow that compares the average http call response time over the last 3 minutes, compared to the average over the last hour. It triggers a warning alarm when the average of the last 3 minutes is twice the average of the last hour. In such cases, it is easy to trigger the alarm, but difficult to tell when the alarm is cleared. As time passes, the newest window moves into the older, so the average response time of the last hour will keep increasing. Eventually, the comparison will find the averages in the two time-frames close enough to clear the alarm. However, the issue was not resolved, it’s just a matter of the newer data “polluting” the old. For such alarms, it’s a good idea to tell Netdata to not clear the notification, by using the no-clear-notification option.

Defines the list of labels present on a host. For example, let’s suppose that netdata.conf is configured with the following labels:

And more labels in netdata.conf for workstations:

By defining labels inside of netdata.conf, you can now apply labels to alarms. For example, you can add the following line to any alarms you’d like to apply to hosts that have the label room = server.

The host labels is a space-separated list that accepts simple patterns. For example, you can create an alarm that will be applied to all hosts installed in the last decade with the following line:

Expressions can have variables. Variables start with $. Check below for more information.

There are two special values you can use:

Special use of the conditional operator¶

A common (but not necessarily obvious) use of the conditional evaluation operator is to provide hysteresis around the critical or warning thresholds. This usage helps to avoid bogus messages resulting from small variations in the value when it is varying regularly but staying close to the threshold value, without needing to delay sending messages at all.

An example of such usage from the default CPU usage alarms bundled with Netdata is:

Which in turn, results in the following behavior:

You can find all the variables that can be used for a given chart, using http://your.netdata.ip:19999/api/v1/alarm_variables?chart=CHART_NAME Example: variables for the system.cpu chart of the registry.

If you don’t know how to find the CHART_NAME, you can read about it here.

Netdata supports 3 internal indexes for variables that will be used in health monitoring.

Alarms can have the following statuses:

The external script will be called for all status changes.

Check the health/health.d/ directory for all alarms shipped with Netdata.

Here are a few examples:

A simple check if an apache server is alive:

The above checks that Netdata is able to collect data from apache. In detail:

The above applies the template to all charts that have context = apache.requests (i.e. all your apache servers).

The alarm will be evaluated every 10 seconds.

If these result in non-zero or true, they trigger the alarm.

$update_every is the update frequency of the chart, in seconds.

Check if any of the disks is critically low on disk space:

$used and $avail are the used and avail chart dimensions as shown on the dashboard.

So, the calc line finds the percentage of used space. $this resolves to this percentage.

Predict if any disk will run out of space in the near future.

There is no warn or crit lines here. So, this template will just do the calculation and nothing more.

Predict the hours after which the disk will run out of space:

The calc line estimates the time in hours, we will run out of disk space. Of course, only positive values are interesting for this check, so the warning and critical conditions check for positive values and that we have enough free space for 48 and 24 hours respectively.

Once this alarm triggers we will receive an email like this:

Check if any network interface is dropping packets:

The lookup line will calculate the sum of the all dropped packets in the last 30 minutes.

The crit line will issue a critical alarm if even a single packet has been dropped.

Note that the drops chart does not exist if a network interface has never dropped a single packet. When Netdata detects a dropped packet, it will add the chart and it will automatically attach this alarm to it.

Check if user or system dimension is using more than 50% of cpu:

The lookup line will calculate the average CPU usage from system and user in the last 3 seconds. Because we have the foreach in the lookup line, Netdata will create two independent alarms called dim_template_system and dim_template_user that will have all the other parameters shared among them.

Check if all dimensions are using more than 50% of cpu:

The lookup line will calculate the average of CPU usage from system and user in the last 3 seconds. In this case Netdata will create alarms for all dimensions of the chart.

You can compile Netdata with debugging and then set in netdata.conf:

Then check your /var/log/netdata/debug.log. It will show you how it works. Important: this will generate a lot of output in debug.log.

You can find how Netdata interpreted the expressions by examining the alarm at http://your.netdata:19999/api/v1/alarms?all. For each expression, Netdata will return the expression as given in its config file, and the same expression with additional parentheses added to indicate the evaluation flow of the expression.

It’s currently not possible to schedule notifications from within the alarm template. For those scenarios where you need to temporary disable notifications (for instance when running backups triggers a disk alert) you can disable or silence notifications are runtime. The health checks can be controlled at runtime via the health management api.